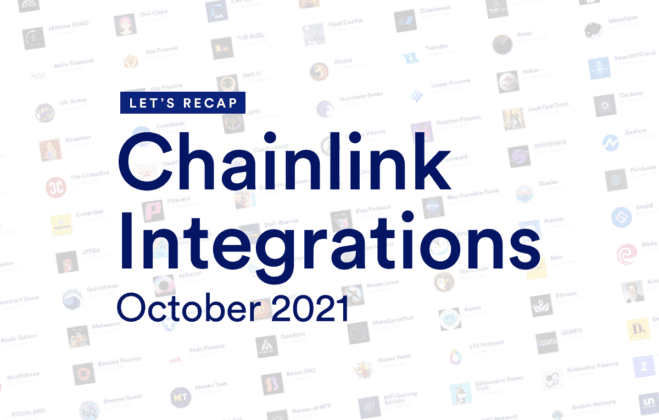 September was chock-full of additions to the Chainlink ecosystem, including Cardano’s strategic collaboration to integrate Chainlink’s oracles and a Chainlink Proof of Reserve data feed for Wrapped Filecoin on Gemini. In late September, Chainlink announced its 800th new integration; by the end of October, the number of new integrations had already surpassed 900.

Headlining October was an announcement that the Associated Press (AP) will deliver its trusted economic, sports and election race call datasets on-chain via Chainlink’s secure middleware. AP’s director of blockchain and data licensing, Dwayne Desaulniers, told Chainlink Today that the launch of AP’s official Chainlink node was a “very significant event” for the 175-year-old news agency.

“I think our geopolitical news and data will be consumed by supply chains and government smart contracts. The incredibly valuable, independent output of AP’s data journalism team will feed a wide range of data to inform applications, particularly in the massive domain of understanding and managing climate change,” said Desaulniers.

The Chainlink-powered NFT world continues to evolve at rapid-speed. After Metasaurs founder Merlin Kauffman (previously known by his Bored Ape Yacht Club (BAYC) persona, Dr. DMT) revealed his identity on Chainlink Live, he told Chainlink Today, “A day in the NFT space is like a week, a week is like a month, and a month is like a year.”

The serial entrepreneur and founder of Soothe conceived the idea for Metasaurs the same day he bought his first NFT from the exclusive BAYC. Metasaurs integrated Chainlink VRF to randomly assign 9,999 unique NFTs that combine digital T-Rex features with traits from Bored Ape #4588 in a tamper-proof and provably fair way.

Hashmasks’ founder, known as Hansen, told Chainlink Today that distributing Beltracchi’s work as NFTs that are randomly assigned to minters via Chainlink VRF upends traditional limits on who can own and exhibit exclusive works of art.

“People want a fair chance at getting one of the rarest artworks. With Chainlink VRF, no one – not even a malicious miner – can cheat the random sales mechanism. We believe that this should be a new industry standard.”

Be sure to stay tuned for Chainlink Today’s coverage of the Chainlink Fall 2021 Hackathon and check out the entire Chainlink ecosystem.