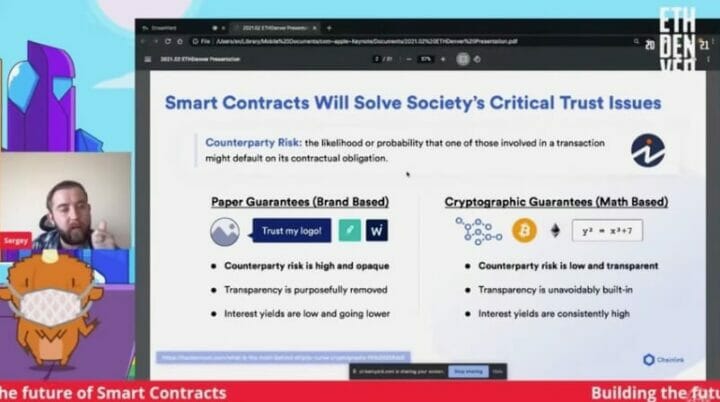 Last month, Chainlink Co-Founder Sergey Nazarov spoke about building the future of smart contracts at ETHDenver’s 2021 virtual event. The presentation focused on what Nazarov described as society’s “seismic shift” from a paper and brand-based system of guarantees “that don’t need to be honored” to a system of cryptographic guarantees that are enforced by math and therefore will be honored.

Nazarov explained that society will react to this revolutionary shift the way it’s reacted to all monumental changes throughout history, as described by the 19th century German philosopher Arthur Schopenhauer: “All truth passes through three stages: First, it is ridiculed. Second, it is violently opposed. Third, it is accepted as self-evident.”

The role of Chainlink and other industry builders is to accelerate mainstream acceptance of blockchain technology, decentralized smart contracts and oracles as self-evident. Fortuitously, recent events such as the monumental GameStop short squeeze “prove our point and accelerate the world’s desire to use this technology,” Nazarov said.

Nazarov noted that the world’s existing financial system is designed to benefit better-informed, better-resourced actors in predictable market conditions. These actors have figured out the system and can bend it to their advantage, but less powerful members of society still want to participate in this system because it’s their only option and it usually functions under normal market conditions. But in unpredictable market conditions, when platforms like Robinhood don’t work for the parties they’re supposed to, the system stops working entirely.

“This is when the rest of the world finds out how the system really works,” Nazarov said.

These instances will only accelerate and increase alongside the growing number of people around the world with assets and access to information through the internet, ultimately culminating in what Nazarov called a “massive crisis of trust” in the systems people use to transact with each other and interact with the global market. As a result, there will be an overwhelming demand for a new fair, democratized, hyper-reliable system that isn’t predatory or skewed.

Just as people once laughed at the internet as a way to globally transfer information, Nazarov foresees initial opposition to a decentralized internet of smart contracts. But he said decentralized finance (DeFi) will become self-evident through the creation of a large suite of autonomous on-chain sources – price feeds, applications and services – that is ungamable, transparent and accessible by the larger global marketplace.

Nazarov invited developers who are interested in contributing to this “redefinition of trust within human society” to use Chainlink’s technology to build new use cases and tools that interact with existing services and make them more consumable. He noted that DeFi is still in its early days, comparing current development to the internet in the early 1990s. But progress is accelerating and developers have vastly more pre-built services and protocols to build new DeFi services and applications than they did at ETHDenver just one year ago.

Chainlink’s oracle network increases the breadth and depth of price and market data, paving the way for the global financial industry to move into blockchain and create financial products that give cryptographic guarantees. Chainlink’s Proof of Reserve on-chain reference feeds are able to prove things about off-chain assets – such as whether there is gold in a vault, assets in a bank account or even tokens on another chain – not with an annual audit, but on a minute-to-minute basis. Nazarov said this is another powerful tool in the developer’s tool box because it allows off-chain world assets into blockchain by proving those assets exist in a certain state at any given time.

The real-world implications of this technology are monumental. “If something like Proof of Reserve existed and was functioning well before the 2008 financial crisis, it’s very possible that it would have been softened or completely avoided,” Nazarov said. This is where developers have the potential to change the world with DeFi applications.

“The combination of more and more advanced data together with the protocols that allow that data to be combined into products is really where one, two, three, five, ten developers can leverage their skills in the most efficient way, and they can build truly industry-defining and industry-changing financial products, insurance products, global trade products, prediction markets and whatever else they can think of,” Nazarov said. “It’s really our goal to provide all of the data and all of the inputs that people need.”

Ultimately, Chainlink is not just about data; it’s about an oracle network that is  responsible for everything blockchain networks are not responsible for. “The middle ground between feature-rich centralized systems and highly trust-minimized but low-feature blockchain systems is an oracle network,” Nazarov said. Chainlink VRF (Verifiable Randomness), which can easily be used on Ethereum to provide random inputs into games and other applications is an early use case.

“The future of how society interacts is really going to be based on the work we all do together as an industry,” Nazarov said. “We are here to help the developers of the world make trust-minimized applications, make the decentralized applications that will be the new way that society interacts around various value, various information.” He ended his talk with a call to action for developers who want to build cutting-edge, world-changing applications: “If this is a worthwhile goal and something that you think is worth pursuing and spending time building, we would be thrilled to work with you on our team.”

Watch the full talk below.