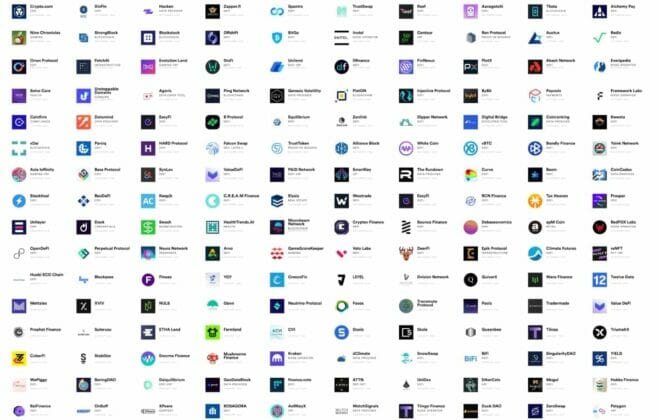 “As the number of integrations in the Chainlink ecosystem continues to grow exponentially, we are seeing the creation of a truly powerful network effect, resulting in more secure and cost-efficient oracles for the entire smart contract economy,” community member @ChainLinkGod told Chainlink Today.

February also marked the launch of Chainlink Off-Chain Reporting (OCR) on mainnet. Because OCR reduces operating costs by up to 90%, it allows the Chainlink Network to accelerate the development of universally connected smart contracts in DeFi markets and other industries. This means an exponential increase in the amount of real-world data accessible to smart contracts and an ensuing surge of innovation across industries such as DeFi, decentralized insurance and blockchain-based gaming, among others.

“Particularly with the recent launch of OCR and the 90% reduction in gas costs it provides, I believe we’ll see this trend continue to accelerate with more DeFi integrations across various chains, more data providers launching Chainlink nodes to monetize their data and the creation of more advanced smart contract applications connected to the real world,” said ChainLinkGod.

Chainlink VRF (Verifiable Randomness Function) is enabling new dApps and gaming platforms such as EtherCats, ATTN, AnRKey X, and Aavegotchi to generate non-fungible tokens (NFTs) as NFTs hit mainstream news. Recently Christie’s launched its first sale of exclusively digital artwork, for which it will accept ETH as payment – another historic first for the centuries-old auction house. In the music world, Kings of Leon just became the first band to release an album as an NFT.

Chainlink Community Grant recipient TheLinkMarine was one of the first in line to buy When You See Yourself. “The entire blockchain space is an incredibly thrilling place to be right now, but I’m particularly excited about the emergence of NFTs,” he said. “Kings of Leon offering their new album as an NFT is a music industry first and, being a fan, I took the plunge and bought it. It’s no secret that the subscription-based streaming model is anything but helpful to artists, so giving power back to artists in the music industry is something I’m a huge fan of.”

Here’s a complete list of February’s integrations. It’s a lot of big news packed into the shortest month of the year, which is a promising prelude to March.

Kraken Exchange: a leading cryptocurrency exchange that will run its own Chainlink node to broadcast Kraken spot prices on-chain. The Chainlink node allows Kraken to both sign its data to prove its origin and supply its Oracle Rates to power a wide range of DeFi applications. (Twitter @krakenfx)

dClimate: a decentralized climate data marketplace that will use Chainlink as a trusted oracle solution for sourcing, validating and distributing high-quality forecasting data, improving weather modeling for farmers, businesses and other users around the world. (Twitter @dClimateNet)

SnowSwap: a DEX for yield-bearing stablecoins is integrating the Chainlink Fast Gas oracle to provide a highly available, tamperproof reference feed on the current Ethereum gas fees. This enables users to determine the costs associated with LP strategies. (Twitter @snow_swap)

YIELD App: an investment app bridging the gap between traditional finance and DeFi that will use Chainlink to obtain accurate, tamper-proof prices on assets offered within its DeFi banking platform. This will enable users to verify the performance of their portfolio and the receipt of fair market rates on YIELD App services. (Twitter @YIELDapp)

BoringDAO: a cross-chain asset bridge that is using Chainlink Price Feeds on mainnet to calculate minting rewards and protocol fees for oBTC, further decentralizing their minting mechanism and ensuring price data around bridged assets is accurate and tamperproof. (Twitter @TheBoringDAO)

Daiquilibrium: an algorithmic stablecoin using Chainlink VRF on mainnet to power its Shrinkquilibrium – an event aiming to return DAIQ to its peg by incentivizing users to purchase tickets in DAIQ, which gets burned, while random winners receive DAI prizes. (Twitter @daiquilibrium)

GeoDB: a decentralized Big Data ecosystem that will launch their own Chainlink node to increase their users’ ability to monetize data. The initial focus is bringing location data to Ethereum, empowering new dApps like GPS-based on-chain rewards programs. (Twitter @GeoDataBlock)

ATTN: a cross-chain NFT and gaming platform that will integrate Chainlink VRF, Price Feeds and esports data oracles to empower users to create dynamic NFTs, as well as buy and sell those NFTs across various blockchains like Ethereum, BSC and Huobi ECO Chain. (Twitter @attncommunity)

BOSAGORA: a DeFi blockchain that will use Chainlink for BOA/fiat exchange rates in its new staking platform. Staked BOA tokens can be used as collateral for fiat loans that are algorithmically invested into stocks. Profits are converted to BOA and distributed as yield. (Twitter @BOSAGORA1)

AnRKey X: a DeFi gaming platform that is using Chainlink VRF on mainnet to guarantee provably fair and tamperproof distribution of valuable NFTs to players. AnRKey X is using VRF because of its ability to provide transparency and security to yield-bearing loot drops. (Twitter @AnRKeyX)

WatchSignals: a leading luxury watch data provider that will run its own Chainlink node to make its price benchmarks available on-chain for developers, enabling new DeFi products like tokenized watches to be used as collateral and creating derivatives markets to hedge against the future price of new releases. (Twitter @watchsignalscom)

Duck DAO Incubator: a crowdsourced incubator working with Chainlink to accelerate the development of DeFi projects by helping them integrate Chainlink Price Feeds. This allows teams to focus on core products while obtaining the best-in-industry oracle solutions. (@DAO_Duck)

Polygon: a protocol and framework for building and connecting Ethereum-compatible blockchain networks that is integrating Chainlink VRF on mainnet as its recommended solution for developers needing secure and fair randomness. This enables gaming dApps like Ether Legends to cost-efficiently scale and enrich in-game scenarios on Polygon’s layer 2 aggregator. (Twitter @0xPolygon)

Aavegotchi: a DeFi-powered digital pet platform that is using Chainlink VRF on the Polygon mainnet to assign traits to Aavegotochi NFTs in their Portals game. Aavegotochi plans to make 10,000+ calls in the first few weeks, thanks to Chainlink VRF running natively on Polygon’s layer-2 network. (Twitter @aavegotchi)

World Weather Online: a premium data provider that will launch their own Chainlink node to provide developers across leading blockchains with cryptographically signed weather data that will support new blockchain-based weather markets in parametric insurance and derivatives. (Twitter @worldweatheronl)

GeoDB: a blockchain-powered Big Data-sharing ecosystem that launched their own Chainlink node, which makes mobile location data available on-chain, live on mainnet. This provides foot traffic info from physical retail stores that can be leveraged to build dApps like location-based marketing and games. (Twitter @GeoDataBlock )

ARCx: a platform enabling interest-earning assets to be used as collateral that will be using Chainlink oracles to help rehypothecate assets in DeFi. (Twitter @arcxmoney)

ICHI: a community-governed infrastructure that has integrated Chainlink into their development stack to enable cryptocurrency communities to develop their own stablecoin. This allows partial collateralization of stablecoins with their native tokens, leveraging Chainlink in the minting/redeeming process. (Twitter @ichifarm)