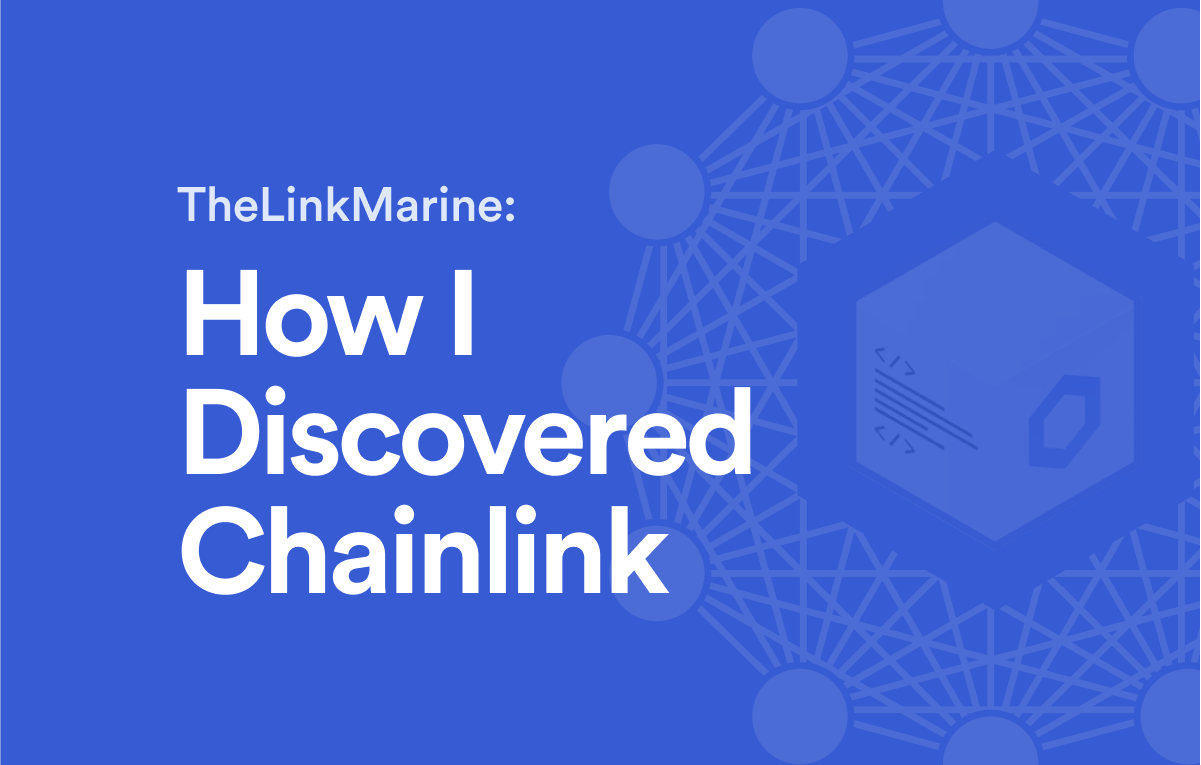 I’ve always been into gadgets, tech, the web, etc. Growing up, I was fortunate that my dad was an early adopter of the internet, and we were the first on our street to have a dial-up connection in the days of 14.4Kbps. This early exposure to how technology can create step function improvements in people’s lives imbued me with an enduring thirst for knowledge and love for innovation. In retrospect, the fact that I discovered and, most importantly, understood Chainlink early on seems to fit the story of my life pretty well.

Over a few beers one evening in 2017, one of my best friends and I went down the proverbial rabbit hole of Bitcoin and crypto in general. We watched hours of YouTube videos, mesmerized by the tech, completely transfixed by the thought of sending money from “Alice to Bob” without the need for an intermediary or middleman.

We immediately “got” Bitcoin and understood the importance of becoming self-sovereign. Soon, we discovered Ethereum and smart contracts. One of my favorite early resources was a TED Talk from Don Tapscott, in which he detailed blockchain technology and some of the most compelling, ground-breaking use cases – from reinventing the stock market to creating a new model of democracy that cryptographically held politicians accountable to their constituents.

I became deeply interested in all things blockchain and spent much of my free time researching the latest projects. One day, my friend, who had become similarly involved in the space, mentioned that he’d discovered a project that was building a decentralized oracle network for delivering real-world data to smart contracts, which cannot access such “off-chain” data on their own.

That project, of course, was Chainlink.

After reading more deeply – and with the help of a now legendary document found on imgur.com – everything about Chainlink just “clicked.” I understood the colossal need for an oracle solution to bring all the world-changing use cases I’d been learning about to life. I was equally inspired by the founding visionaries – Sergey Nazarov, Steve Ellis, and Ari Juels – and their commitment to building a world powered by cryptographic truth.

Back in 2017, there were just a handful of projects integrating Chainlink oracles. But they rapidly started multiplying and soon there were so many that it was difficult to keep track of them all. I built chainlinkecosystem.com as an independent resource to help those discovering Chainlink visualize the scope of now more than 1,200 Chainlink ecosystem projects spanning decentralized finance (DeFi), decentralized insurance, blockchain gaming, and dynamic NFTs.

As a full-time senior UI designer, I often work midnight hours to document multiple new Chainlink integrations happening every day – up to 100 new integrations in a single month. The support and appreciation I’ve received from the Chainlink community has made every second of this effort worth it – especially when I remember how crucial early resources were to my own understanding of oracle technology.

I’m launching a new and improved Chainlink ecosystem site in the coming weeks and I’m thrilled to deepen my contribution to the global community that’s formed around Chainlink. I’m eager to see and hear how the site helps others on their path to understanding and grateful to pay it forward.