Diving Into LinkPool With Co-Founder Jonny Huxtable On Chainlink LIVE 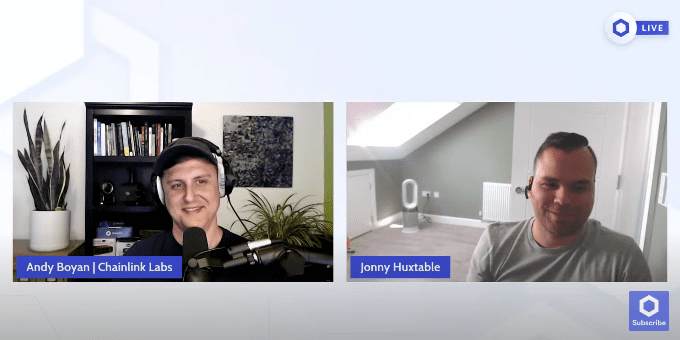 Recently, LinkPool Co-founder Jonny Huxtable joined an episode of Chainlink LIVE, hosted by Andy Boyan of Chainlink Labs, to talk about, among other things, the recent updates released on Market.link.

Jonny gave a great explanation of what LinkPool is and what it does; he walked through the recent update released on Market.link, talked about the resilience the Chainlink network has shown through times of of volatility and prohibitively expensive gas, previewed exciting news on the horizon and answered questions from the community. If you missed the episode, I highly recommend you watch it here. As Community Manager at LinkPool, I’ve compiled a summary of Jonny’s key points.

When Andy asked, “What is LinkPool?,” Jonny’s answer left no room for doubt:

“We are one of the largest ecosystem developers on the Chainlink network.”

Jonny highlighted the tremendous work the LinkPool team does to offer products and services that lower the barrier to entry for data providers who wish to participate directly in the Chainlink network by running their own nodes – and how this translates into developer-focused changes and updates around Market.link.

The Chainlink Market and its latest update were the undisputed stars of the whole episode; and no wonder, as it is a milestone for data providers who want to monetize their data directly and through a UX that lowers the hurdles of making their APIs available on-chain.

“The Marketplace serves as a core entry point to the Chainlink network,” Jonny said.

This led him to an especially relevant point: the Marketplace is a community-driven resource, where anyone who is building on the Chainlink network, operating a node, providing data, or creating external adapters can list what they are building and what they have to offer the network.

Jonny also dedicated several minutes to exploring the Chainlink Market’s Network Metrics and its cross-chain capabilities, which allow users to audit the general state of the Chainlink network in different chains by themselves with just a couple of clicks. This served as a pretext to bring up the gas issue:

“This would have been a scary page a few weeks ago!” Andy joked, while browsing through the Feed Updates site, in reference to the high gas prices on the Ethereum network in previous weeks.

“Seeing gas prices spike to 2500 gwei and all of the Chainlink feeds still operating as normal is a huge, real-world stress test and serves as validation of the resilience of the Chainlink network, especially the OCR protocol that had never been through that sort of stress test before,” Jonny said.

One of the most exciting points Jonny covered is the new types of data feeds and data providers that are interested in the Chainlink network. Seeing more data providers running their own nodes is a great leap forward in terms of decentralization and a trend that will ramp up in the future as an easy way for traditional businesses to find new revenue sources in the new data economy.

“Rather than just supporting them on the LinkPool node, all these guys are running their own nodes and providing the data directly as a first-party oracle. It’s a trend we are going to see a lot more of,” Jonny said.

Because supporting all of these new data providers is sometimes challenging, the LinkPool team is actively working on ways to display and enable visualization of how these new non-DeFi data feeds are being used.

For example, we all have a relatively clear picture of how to represent a data feed that reaches consensus on the price of an asset, but how do you represent a data feed about the wind speed in a certain geographical area or the scores of a Counter-Strike game? Jonny said some of the data feeds he finds most surprising are those related to tokenized luxury goods, such as luxury watches or collectible cars. All of these non-DeFi data feeds present exciting challenges that LinkPool is figuring out.

Jonny encouraged developers who are building cool stuff at hackathons to use the Marketplace to find new data providers that enable innovative use cases.

A Roadmap For The Future

Throughout the episode, Jonny hinted at several Marketplace improvements in the works. These include consolidating the view of different networks to enhance the user experience; supporting Chainlink VRF, Chainlink Keepers and new, different chains; changing the way metrics are done, thanks to The Graph; onboarding a significant number of new data providers and making the Marketplace a lot more developer-focused, in general.

When Andy asked about LinkPool’s roadmap for the future, Jonny revealed that the Node as a Service or NaaS model is in its infancy. The Chainlink ecosystem has finally reached a point where it makes sense to build and develop NaaS. This means that people will be able to go to the Marketplace and deploy a node with a couple of clicks, manage their nodes through a simple UI, deploy adapters, use data sources in the Marketplace and list what they create on the Market as well.

“That will be a big win for people that are just getting started or that are participating with hackathons, so they don’t have to go through the process of running a Chainlink node.”

Jonny and Andy ended the episode with a message to both members of the developer community and non-developers who would like to get involved with LinkPool or the Chainlink ecosystem in general: Spin up Chainlink nodes, think of cool use cases or build APIs that provide interesting data and learn everything you can about the Chainlink ecosystem so you can help others understand it better.

Chainlink Community To Host Dozens Of SmartCon 2022 Watch Parties Around...