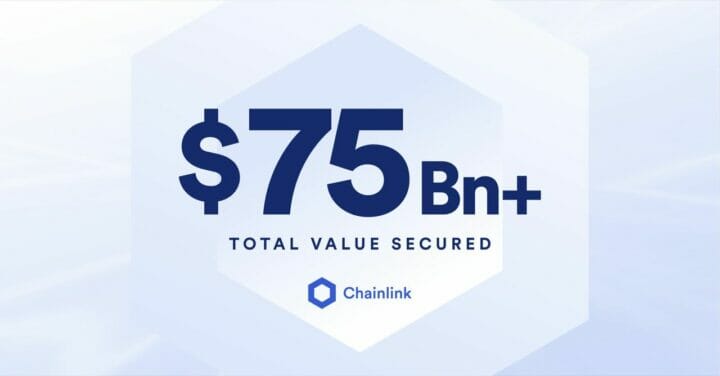 “Crossing $75Bn in total value secured makes the Chainlink network one of the most value securing forms of decentralized consensus on the planet,” said Chainlink Co-founder Sergey Nazarov in an official press statement.

The Chainlink Network comprises independent oracle nodes run by world-class DevOps teams from organizations such as Deutsche Telekom’s T-Systems and Swisscom. Since its mainnet launch in 2019, over 700 Chainlink oracle networks have served over 600 million data points to over 10 different blockchains and counting, with Cardano’s strategic collaboration to integrate Chainlink oracles underway and Solana mainnet integration set for Q4.

Chainlink’s oracle networks now provide more diverse datasets such as weather and climate data used to power parametric crop insurance. Recently, the Associated Press (AP) announced the launch of its own official Chainlink node to deliver its trusted economic, sports and election race call datasets on-chain in what AP’s director of blockchain and data licensing described as a “very significant event” for the 175-year-old news agency.

“Market data in DeFi is just the first area where Chainlink is beginning to secure and trigger massive amounts of smart contract value,” Nazarov said. “As more and more organizations launch Chainlink nodes, we’re seeing all sorts of datasets enter blockchains through Chainlink.”

Chainlink Labs, the team developing the Chainlink protocol, is fostering the future of hybrid smart contracts at The Chainlink Fall 2021 Hackathon, its largest hackathon to date, where developers are competing for over $500,000 in prizes by building novel use cases with Chainlink’s current suite of decentralized services. Previous winners of Chainlink hackathons have since raised millions of dollars in funding and attracted the attention of high-profile advisors.

Nazarov summed up Chainlink’s larger mission to create “a society powered by truth” during the Fall Hackathon’s opening ceremony, with a nod to limitless opportunities for the builders of Web3, saying, “The contracts that people didn’t think were possible yesterday are now possible today.”