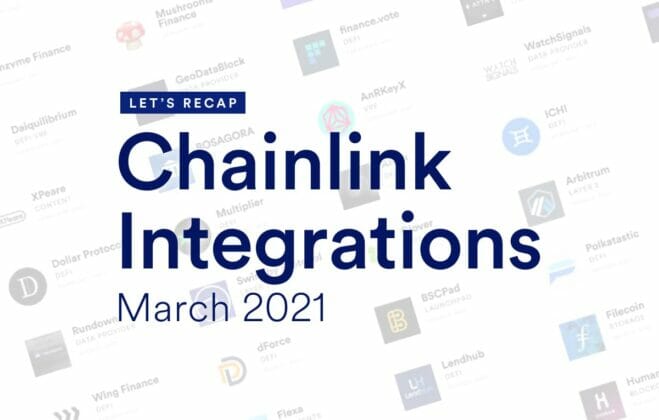 Co-Founder of SmartContent and Chainlink Today contributor @ChainLinkGod said March marked a milestone in “significant diversity of integrations” across the Chainlink ecosystem, including the creation of provably rare NFTs for projects like Illuvium and Ether Cards, new data provider-run oracle nodes like The Rundown and SportMonks, secure price feeds for DeFi protocols like Rari Capital and SushiSwap, and even an integration with the decentralized storage network Filecoin.

“Thanks to the scalability improvements provided by OCR and an increased selection of oracle services like VRF, the pace of integrations is seriously beginning to ramp up quickly and it’s very exciting to see the Chainlink Network continuing to scale to meet the needs of the smart contract economy,” he said.

(Read SmartContent’s What Is The True Definition Of Chainlink?)

There is now a total of 475 integrations in the Chainlink Ecosystem, including:

Yesterday, we published a feature about one of Chainlink’s March integrations, Jarvis Network, a DAO-owned set of protocols on Ethereum for universalizing and “uberizing” financial products and markets. Jarvis’ CEO, Pascal Tallarida, said OCR  – which enables up to a 90% reduction in gas consumption – substantially accelerated Jarvis’ go-to-market strategy: “OCR ultimately allowed half of our small team to work on the core of our project instead of focusing on building our own system.”

Here’s a complete list of March’s integrations, which may foretell an even more expansive April.

Fuse will use Chainlink Proof of Reserve to mint and verify the collateralization of FuseDollar (fUSD). (Twitter @Fuse_network)

Pluto, a Korean crypto exchange, will be launching a Chainlink node to bring their aggregated trading strategy analytics on-chain for use by the DeFi ecosystem.

Clover will integrate Chainlink as the preferred oracle solution to support its EVM compatible framework for Substrate dApps. (Twitter @clover_finance)

dxFeed, a premium data provider, will launch its own Chainlink node to get its existing APIs blockchain-enabled. This allows dxFeed to sell equities, options, indices and various other financial datasets directly to dApps across different blockchains. (Twitter @dxFeedSolutions)

BSCPad is recommending Chainlink as the go-to oracle solution for startups supported via its BSC launchpad and accelerator program. This sets up early-stage projects for success by ensuring they have the best-in-industry data quality and oracle security. (Twitter @BSCPAD)

Rare Pizzas, a generative NFT project, has integrated Chainlink VRF to mint 10,000 digital pizzas with provably rare attributes and a verifiably random distribution. As a community-driven project, the digital pizza NFTs are a celebration of Bitcoin Pizza Day. (Twitter @rarepizzas)

FilDA integrated Chainlink on mainnet to price assets used within its decentralized lending platform. As a blockchain-agnostic oracle network, Chainlink’s high-quality data is able to be consumed by FilDA at the native speed and cost of HECO. (Twitter @FilDAFinance)

Flexa is using Chainlink Price Feeds on mainnet for tamperproof, fair market exchange rates on each of the digital dollars, tokens and cryptocurrencies that the Flexa payment network supports at more than 40,000 retail locations across the U.S. and Canada. (Twitter @FlexaHQ)

LendHub, a decentralized lending protocol, will integrate Chainlink Price Feeds natively on HECO to ensure that all loans are issued and liquidated in accordance with aggregated, tamper-proof, volume-adjusted price feeds reflective of global markets. (Twitter @LendHubDefi)

Blue Antoinette is launching its own Chainlink node to supply global tax data on-chain. This enables automated on-chain tax solutions, such as the ability for organizations to calculate sales and VAT tax when selling products via public blockchains and accepting crypto.

Synbit is using Chainlink on HECO mainnet to obtain precise, up-to-date, tamper-proof price feeds on all collateral and synthetic assets used and traded on the platform. This ensures the solvency of all synthetic assets minted on Synbit. (Twitter @SynbitProtocol)

HUMAN Protocol will leverage Chainlink for reputation oracles that autonomously distribute tasks and payments across its multi-chain labor pools. They also plan to use Chainlink for Price Feeds and a Proof-of-Humanity oracle for on-chain captcha verification. (Twitter @human_protocol)

Submit story
Previous articleJarvis’ CEO On What It Takes To “Blockchainize” Traditional Financial Markets
Next articleOrdering Pizza With A Smart Contract Could Be One Small Step For Man, One Giant Leap For Mankind